Django Reinhard brought fame to this type of guitars, mostly called Gypsy guitars.
Reinhard in cooperation with Italian guitar player and luthier Mario Maccaferri developed a couple of models for French company Selmer during the 1930s. These instruments are still modern innovative and used today.
Only hundreds of guitars were made in Selmer factory. Expensiveness and market demand characterize Gypsy guitars nowadays. It is a timeless model of guitar out of doubt for its inimitable sound and characteristics.

Prochazka Custom Guitars offer full range of Gypsy guitars designed under plans made up of original Selmer instruments produced during the 1930s. Our guitars are still tested and improved in cooperation with professional musicians playing gypsy music.

Nylon: This model was developed at first. Guitar with internal resonator, "D" sound hole, classic guitar bridge and nylon strings.
Full strong and loud sound, usable in big band in conjunction with nylon strings were the principal aims. This model didn't come up to expectations.
There are only a few original guitars in the world.

D hole: Guitar with the same appearance as the previous model but without internal resonator, with different top plate proportions.
However sound characteristics is really different from the original model.
Mellower low voiced instrument is appealing for soloist but it isn´t applicable as a solo guitar in the band. 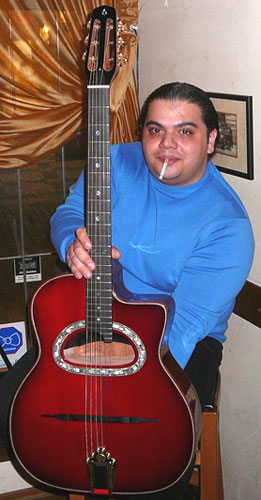